And I’ve decided that yes I’ll be skipping Cyphacon this year. But I may also skip Bayoucon this year. And we won’t be putting up a Christmas tree, although if I can get a wreath I’d like that for the door. =^-^=

The past year’s events have kind of left me… not wanting to do these things anymore. A lot of what I’ve been doing was for my children’s sake: I’d pick up trinkets at the con for one, I’d drag the other along so she could have fun, we’d put their presents under the tree. It’s all kind of pointless now, really. My kids will never know how much my world centered around them, that even when working a lot of it was for them in some offhand fashion… from buying food to somehow getting a prom dress… to sending the boy a card or random item I thought he’d like. These days I’m just… fuck it. There’s literally no reason to bother any more. So I’m throwing out the hype, the glitter mess, the exhaustion and trading it in for peace and quiet.

I haven’t been able to put out a single new chapter for HB all year because of all that’s happened: that’s a big incentive for not doing any conventions. I have nothing new.

And I don’t want to do commissions so much anymore. I’m burned out. I want to do my *own* stuff. I wake up every day wishing I’d win the lottery or… something… so I could, indeed, do my own stuff.

Cyphacon preparations. This means I’m spending money and hoping to make money in order to spend money. And deciding on my display and how things are going to go.

Since I’m consolidating a lot of my past stuff and hoping to just plain get rid of it while introducing a new item – art magnets – I realized the need to finalize a good display was upon me. I’ve played around with table setups in the past, and they all met with a big mess. I don’t want a mess this year. I want elbow room.

So I dragged Pestilence to the store and forced him to brain storm with me. A design was spawned after playing with two sticks and a bit of wood. This was born after a bit more thought. 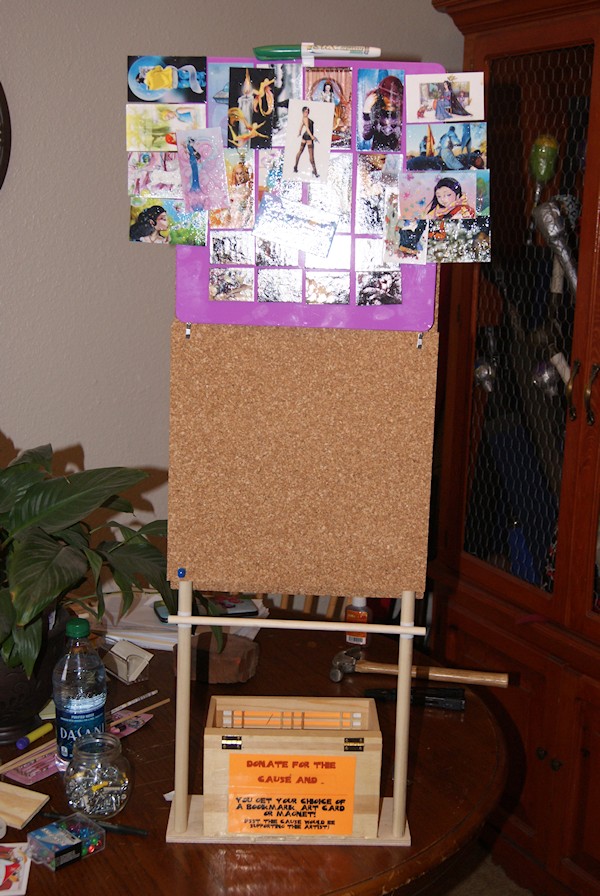 If you’ve seen me at conventions in the past you’ll recognize that little box whose top is broken because of Pestilence’s hammy fingers. And voila, I have a place to display the art magnets that also consolidates the bookmark adoption program. Things move up. Table room increases.

But it’s a work in progress.

Another thing I’m doing in preparation of Cyphacon is holding a Kickstarter campaign to raise funds to print 10 Confessions & A Kiss,chapter 1.

I know I’m still in chapter 1 after all this time and should be in chapter 4 or 5 by now. That town-destructive tornado really did throw my project(s) and life for a loop. I can’t imagine how devastated my world would have been had I actually been there as opposed to just being hurt financially. Fortunately things are slowly getting back on track and my current pace with making more 10 Confessions is slowly increasing. But I’m still stuck in chapter 1, whether I like it or not.

I have a pace I go at now: one page of Heavenly Bride, then one page of 10 Confessions, and on Sundays if I have the time I work on Trait of Honor. It’s 3 times more than I was able to do for a while, although lately work has sapped those days away from me again. But hey. It’s a living. And I’m proud to say it won’t be long I’ll be finally putting out chapter 2!

If you’re curious about the 10 Confessions campaign, there’s a widget to the right of this post. And off I go, back to work.