There has been absolutely no interest in the trading card game… which I’m not surprised by, incidentally. I’ll just let it go and get some made here and there, as I was doing with Akashik, to handle at conventions. I don’t go to conventions much anymore, but then again I don’t have the money to have cards made much either. So it’ll work out one way or another.

Today my dog decided he wanted to spend time in the bathtub. We’re not sure why. He knows the word “bath” and doesn’t seem to like or dislike them. He’s squeamish of the rain. And he’s very sick with parvo at the moment – my second animal this year with parvo.

Do some research on parvo and you come across a lot of panicked websites talking about iv drops, near 100% fatality rates, and bereaved pet owners who sat by their animal day and night in a hopeless battle. Most of these posts, I admit, were found in response to a natural aide (not cure) for parvo. All seemed ready to panic at the mere mention of the word.

When my other dog, Bullet, got sick with parvo we scraped our money together and off he went to the vet. I was thinking he wasn’t going to live. But the vet was a good man. He gave Bullet a shot to stop the vomiting and prescribed antibiotics, nutrition paste, and calorie water. By day two (of me noticing he was ill) he was drinking water and looking for food. By day three he was pissing me off again. Good old Bullet.

Loki, the current dog in question, had been given the first in the puppy shot series. Not exactly loaded with money, we couldn’t afford to get him his second. I noticed something was a little off last week when the greedy little sucker stopped eating as much and his hip bones started to show. I was convinced on Sunday when he started to vomit and stopped fighting me on the little things – like going potty in the rain. We had to beg borrow and steal this time to raise the money – all of $214. Monday as quickly as we could he went to the same vet (who had retired in November but fortunately had come in that day as a favor to the vet who had bought his practice) and got the same treatment as before: paste, antibiotics, shot, anti-vomit meds, etc.

Now, Loki isn’t fighting back as hard as Bullet did. He’s what they call a “soft pup” where Bullet was a dominant megalomaniac little pain in the rear. It’s day two and he finally wanted some water on his own, but he turned up his nose at chicken broth and soft food. My sagging hopes were lifted a little when I called him and he pranced – just for a moment – to come to me. But I can tell he’s not out of the woods just yet.

And he has decided he’s going to be strange about it. He asked several times to be in the bathtub. We obliged, but that wasn’t good enough. He wanted the water running. We obliged. He lay down in the water.

He went outside in the pouring rain when denied the bathtub and… lay down in the mud.

And he keeps wanting to be in the bathtub. We can’t figure out why.

I hope this infatuation with being in water is a good thing. But he’s 1/2 terrier. Who knows what’s going on in that wicked little mind. 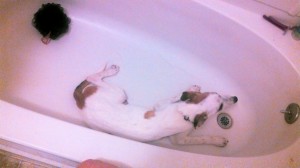