I should have put this up weeks ago, but the truth is I misplaced the disks. Well I found some of the files tonight. Enjoy!

I got a pleasant surprise yesterday. My name came up on the waiting list at OMG Con, and they invited me to have a table.

I barely tried with my entry, and I was just talking to someone earlier that they’d never let me in. So I was reallllly surprised. I responded and told them I was definitely interested but had to check my calendar. They gave me until Monday, but I think to spare them the agony I’m going to try to answer today.

On the one hand I really want to go. I haven’t been to OMG Con in any capacity since it was new and barely populated. I wanna seeeeeeeeeeeeeeee.  I just happen to be free that weekend, too. They’re only an hour away, so the commute would be wonderful. It’s perfect.

On the other hand, I simply don’t have the table money. I just don’t. I can get it, sure, but not by Monday. This makes me sad.

Well I’ve emailed them and explained the situation. Their email says I have time. If I do, then all should be well. I hope! I also asked about sharing a table and, if I can’t get it, I’m recommending a local merchant I’m acquaintances with. Her stuff rocks.

The latest print of The Heavenly Bride Book 2 came today. This time I have the pages correct. I’m not happy with how one of the internal double page spreads turned out, but other than that woohoo! I don’t really expect people to line up in droves to purchase it, so two books should be more than enough. I do also intend to have free art cards on the table with the web address, for the adults who are curious. 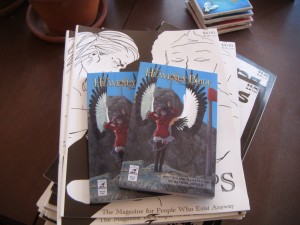 I also found a box of my old magazine, Kinships, in the basement. My table stock just got fatter as a result. I’d like to see these sold, and the main reason why I still have them is because they’ve been in a basement in the dark. So I’ll bring a few and offer them for $1 or something. They’re mostly prose, so again I don’t expect a huge interest.

I almost held a donation drive at The Heavenly Bride, for although I was able to scrape the money together to have a public appearance I don’t have it to get Charlie fixed. If you don’t know, Charlie the Working Computer (and All Purpose Gremlin) has tech that has fallen behind of the game. I can still flat, of course, and do most things. But the other day I was trying to do something with the new iray rendering system with DAZ, which is how I make The Heavenly Bride, and he just couldn’t keep up. And then I was trying to flat a page for a client and because resolutions have gotten bigger, Charlie couldn’t keep up. That was.. work… being interfered with… whine… On top of the motherboard dying, it’s just been a growing issue that I no longer can ignore.

But we’re talking tons of money my husband and I just won’t have until a few more retirement situations are fixed around here. You see, our mortgage is higher than it’s supposed to be because of a tax error. It could be easily fixed, except for red tape that says it can’t be easily fixed. So we have to wait for the tax bills to come out to get it fixed. This might not be until December. Couple that with IRS issues, and yeah. I’m sure you get the picture.

Fans to the rescue, though!! There is one in particular fan who is very supportive. I told him I was going to hold the fundraiser and – this is important – forbade him from participating. So what does he do? He buys the entire system and is having it shipped to my house.  *thunks head on desk* Next time I’ll simply hold the fundraiser in secret.

Well, he didn’t get everything because we didn’t tell him everything I need. Mwahahaha… but the remaining part is something I’m sure I can afford through sweat and tears, being a second video card for the system so it will run faster and make pretty Heavenly Bride pictures in style.

Opinions, guys! How should I thank my awesome fan for this work boost? Original painting? Stickers for life? Inquiring minds wanna know.