I have to tell you, I’m certainly getting a reporter’s workout by not being left alone despite the other party’s claims they want no contact. 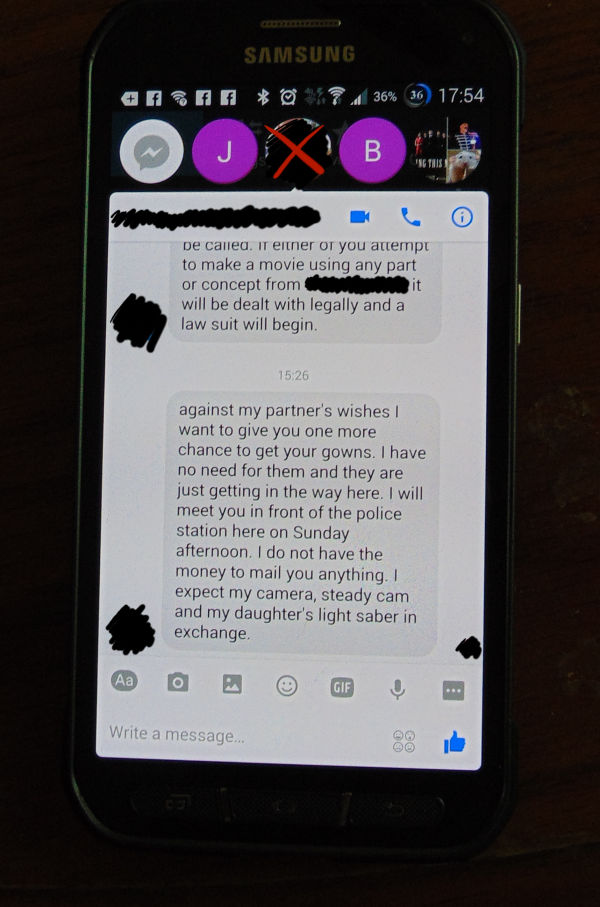 The pictured gem above came today after being contacted on her behalf in an attempt to get me to meet her at a police station to exchange our items. I had replied that I did not want this person within 50 feet of me (rather I wish she were on the other side of the solar system) and that I was not doing all of the driving this time. I had made the fair offer to meet halfway. I had offered to mail the item COD. Hell, if I had proof that she had already mailed my ballgowns the cheap way I’d simply mail her camera out without a COD condition. Instead of there being an attempt to come to some sort of fair solution that doesn’t shaft me after all I’ve been through, I get threats and now this – after being told she wanted no further contact.

Didn’t I tell you she was instigating things every step of the way? Yet another piece of evidence to drive home. I told you I had no reason to lie.

I seriously have to wonder who she thinks she is to demand that I’m going to drive two hours one way to her little town and put myself at risk to being falsely accused inside a police station at her convenience for a $50 camera, a homemade steady-cam, and a toy light saber. I can see her desire to get her items back, but she didn’t even think about demanding the steady-cam and light saber until just now – as if she’s trying to trump up charges or something.  Also, when we told her daughter on numerous occasions that she had left her lightsaber at our house she finally told us not to worry about it, we could have it, that she had gotten another. There has been absolutely no concern for this cheap little toy until now. Petty much? Would it be too ironic if I called her an Indian Giver?

This woman’s husband has a vehicle. If it’s that important, why can’t he put her ass in the passenger seat and drive her halfway to get her things? Why can’t he just come by himself to get her things? I don’t care if his vehicle needs work. So does mine. I ain’t no rich patty over here; I’m just someone with no desire to be taken advantage of again.

She says she doesn’t have the money for COD. Too bad. I have already made arrangements to get the camera gone, and that situation is already in motion. I did that because of the legal threat text I received today, and I realized that the camera did not need to be in my house anymore.  Apparently trying to get it to her like a mature adult without putting myself out and being walked all over was never going to happen. I wasn’t going (even if I could contact her) to tell her what was going on. She’s pretty much shooting herself in the foot repeatedly here, all out of some desperate need for drama or something. I don’t know how long it will take the camera to get to her now. Maybe months. Gotta love that red tape.

Aside from this blog post, here is what we have been pushed into doing. We’ve contacted a lawyer. We’ve put forth a cease and desist letter as well as a goods reclamation letter. (In the mail!) We sent them with delivery confirmation. We’ll most likely be doing this through legal counsel or at the very least an unaffiliated party because of her demands for no contact that she has willfully broken.

I am going to be looking into adding mental anguish to my complaint list, as this woman’s harassment is so stressful I can’t eat and am having difficulty getting work done. This will take a little research.

When it comes to my ball gowns, they are not half as important as my right to Free Speech. But on the other hand…  she should probably cough up my property somehow. She has the means. She needs to act human about this and do the right thing. Period.

Also. She needs to go away.