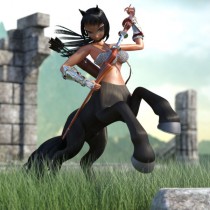 Computer maintenance – that important and semi-annual thing that keeps me and my small business going. I’ve been working on getting the computer back into shape for a couple of weeks now, being as I had another outage. I’m getting good at catching these things ahead of time, though, and am trying to take to stocking up parts for emergencies. Right now I’m using a main hard drive that has some questionable spots on it, but every time I start over I lose things so I’m hanging in there as long as I can. And it’s one thing at a time.

When I go through this process, I tend to make 3D artwork for artwork’s sake. So here I am to show off the latest piece:

Star Taur by spearcarrier on DeviantArt

I’m rendering another one as I type, because the objects I used needed tweaking. This last piece above had a better reaction than most of my things, which makes me glad. And I like making centaurs. I’d say that I’m going to do a series of them, but everytime I make plans like that something happens. So. I like making centaurs. I’m rendering a second one as I work on the 3D parts it takes. And. Neigh.

I don’t want to turn this blog into strictly an art blog because… no. But people have requested my prints. So I’m going to add a feature here for people to have the option. When I do a cover reveal (a practice I hope to begin soon with the next up and coming book we’re working on producing), if the artwork is open I can do that then. Same goes for other things I’ve made. In this way perhaps I can garner some more funds to support the visual novel project and The Heavenly Bride among other things.

They were plain centaurs, tan and male. And the adventure didn’t end there, oh no. Because a little later I met a different tribe of centaurs, all pale and female with hair in luxurious Greek hairstyles adorned with large tropical blossoms.

And then – whoah! Hold your horses, for a prince’s company happened to be passing by and – upon seeing me, the flower of an adorably cute princess – decided we two must wed. So they detained me politely and sent for him.

My lady in waiting and I waited. And waited. We tried to make conversation with the servants. Although they would politely answer my questions or give me a sentence, they would then clam up. I realized they’d been ordered not to talk to me if possible. And we waited.

I began to think perhaps he was coming from a long way, and after a while I couldn’t stand the boredom anymore and left their traveling tent. Just as I was leaving, however, the prince’s travel company came by. He was a dark, thin man with a chiseled beard (rather like Satan) who called out for me. “Princess! Princess!”

I was curious about him, so I stepped forward – but not too far. I mean, ew. The road was muddy. In fact it was almost as if he were traveling down a dried up river. His people were on the side cheering for him. I asked one of the people what kind of man was he. Would he treat this princess well?

The man said to me he was a wonderful prince. I got from the man that there was a reason why the servants weren’t allowed to converse with me (the man had no idea who I was), but there was a real reason behind it. He does have a temper, the man said to me. And that to be with him you have to be willing to bow down and submit, to always be under his rule and his thumb.

I value my freedom a lot, so much so that standing there as a papered lovely princess who wouldn’t dream of touching mud (of all things) I said firmly, “Then I shall not marry him.” I turned my back on the affair and began to stride away. And that’s about when I started to wake up. I fought it because something else was happening and I wanted to see what it was, but my slumber was definitely over.

I’m somewhere over 30 years old. I’ve written a lot of stories about elfs, spaceships, and love. Centaurs and unicorns have been dancing through my doodles for as far back as I can remember. And yet this is the first time I’ve ever dreamed about any mythical creature – I mean aside from your typical “the devil is out to get me”, “my doll is coming for me and I never even thought of seeing a Chucky movie” and “oh look, a bloodsucking imp” dreams. I’ve never dreamed about a unicorn, a fairy, shining armor… so the novelty had me scratching my head for a while. I’m not even sure where I got the thought of centaurs from, but they sure were pretty.

I think, maybe my subconscious is starving for me to finish one of my books and write a good old-fashioned fantasy. Nobody writes those anymore. And I am very fond of the old style, “Person goes on quest, person finds love interest, person saves the day, bad guy is a dummy.” Like Elizabeth Boyer’s work – gods rest her soul.

I honestly sat down and tried to figure out where a centaur would figure in 10 Confessions & A Kiss, but I’ve already got a clan of mythicals planned there. A centaur would only be a sidetrack and get thoroughly in the way. And I certainly can’t put them in Heavenly Bride.

So I guess these centaurs are going to have to content themselves to live in the center of the Earth until such a time as the ground cracks open. Or I get inspired. Or both.