It’s been a nifty day for two of the Apocalypse projects: good news all around. News that made me squeal in joy.

The first was an email from one of the backers of Pestilence’s book, The Page of Cups. It appears that their book finally arrived and their “girls” love it. They sent pictures: probably the best pictures of the book ever. EVER! With the girls. I thought you’d like to take a look: 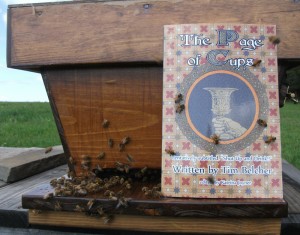 And you can see in this next image, his girls are even dancing around the circle ho-down style: 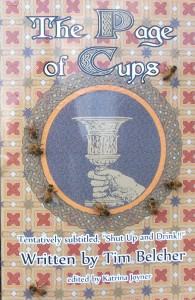 Also, in an attempt to remain positive about 10 Confessions’ predicament with the Kickstarter campaign, I put out a private email to what backers there were offering them a free PDF of chapter 1 if the campaign failed. After all, I write this thing so it will be read. I certainly don’t mind giving away a free copy or two.

I also made 10 little chapter 1 charms all by myself – because if each chapter is going to have an associated charm I gotta start somewhere. Even if the campaign fails. For consistency. Here’s a movie about them.

Well, with 7 days to go on the Kickstarter Campaign to fund 10 Confessions and only 5% funded I’d say that this campaign is not a success – it won’t get featured or put up and I wasn’t able to get folks to look at it or take it seriously.

No matter, I will still carry on with Chapter 2. It’s just going to take me a little longer is all.

On the upside, someone who wanted to invest in the comic saw that the campaign was a bust and invested personally. Which meant that I got a reason to create the bookmark and will have to make the charms myself by hand. =^-^= Because come chapter 2 being done, I’ll try again with a campaign for chapter 3 and so on and so forth. I think it would help comic integrity is the nifties were consistent.

Regarding the bookmarks, my husband suggested that each bookmark after I feature the initial characters should feature other important characters and, most importantly, future love interests. Great idea!

But first I gotta start with our leading lady. Chapter 2’s bookmark will most likely be Alexi. But here is the bookmark for Chapter 1 for you to see.  The original artwork I did with pen and colored pencils. Bookmark assembly – lamination and all that – I also did at home. 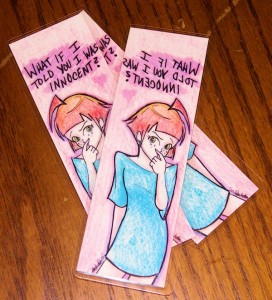