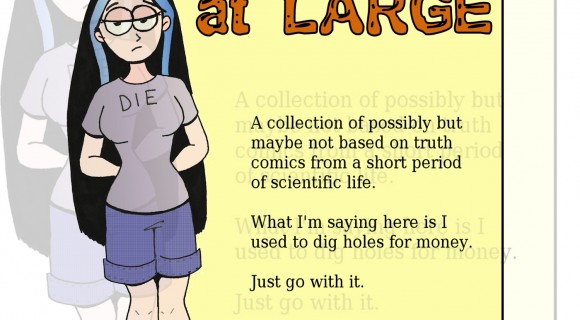 Over the years I haven’t went unscathed from the art/story theft scenario. For example, when I was in my early 20’s whoever ran that “contest” ad in Dragon Magazine took my story and rewrote it enough so that I couldn’t sue and published it… in Dragon Magazine.* (Which makes me think it was a scam being run with the magazine.)

Then of course there’s the Twilight fiasco we all know about… and there are other examples, I’m sure, but I don’t exactly sit around dwelling on them.

Sometimes theft comes in the form of flattery. For example, there was this animation studio that contacted me about Akashik a few years ago. Enthusiastically I told him everything. We agreed we’d use 3D. I even… gah… I even sent him my 3D models to use. Then he disappeared. Now there’s a popular webtoon with a bad guy that’s way too suspiciously like Taus, a good guy that’s way too suspiciously like Ganji, and a host of other characters that are blatantly named after things the creator liked. It doesn’t take much to put 2 and 2 together. Let me point again to Dragon Magazine.

Today I ended a sideways abusive relationship. I say sideways abusive, because the so-called friend wasn’t outright abusing me. They weren’t punching me in the face or calling me names. Instead, they were allowing depression to be a crutch in their life. (Not an easy obstacle to surmount, I know from experience.) And their depression and rants were becoming aimed at everyone around them, blaming friends for not being there at their beck and call for pity 24/7 (I do mean pity), and just damn. The vitriol. Damn. When I was at the height of my depression I wasn’t that bad. And things didn’t get better for me until I learned to walk away from it, even to the point of leaving my blood kin behind.

After I’d blocked the “friend” on Facebook, my husband found something that I never knew was there. And… I’m not annoyed. When this happens there’s not much you can do about it, to be honest. It’s just.. it’s not right. Maybe they gave me credit at the time. I dunno. They’re one of those fan types that take from every show they like and make what they consider original characters (when they’re not). Regardless, the fact that it exists means I have to make this official announcement… because I don’t want another tv show without my credit. I don’t want another Twilight situation, or Dragon Magazine.

I like that my stuff is awesome to some people. I just wish I weren’t the one artist where everyone thinks my stuff is awesome, but only to steal as their own. Draw fan art, please draw fan art! I’d love some fan art. Don’t go taking my shit and saying it’s yours. Yet for some reason when it comes to my creative universe, I’m the invisible artist that never gets credit where credit is due. GAH! Annoying. 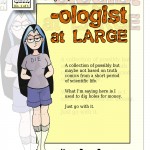 So this (to the right) is Ola Gist. She’s been around since my college days. Most of the comics inside of that book are based on real life events that I witnessed or experienced while learning to be and working as an archaeologist. (You’ll need to click the image to see it bigger.)

Usually Ola’s shirt reads DIE. That shirt is pretty damn popular, too. When I wanted a shirt that said DIE just like that, I went to buy one. There were none. So I’ve been making shirts that read DIE with acrylic paint and/or iron ons ever since. They always get compliments and appreciation.

I’d have some made if I honestly thought I’d be noticeable long enough to sell a few. So on Fridays at conventions I always come dressed as myself, which means I’m wearing a DIE shirt because I am Ola Gist, and all is good with the world.

This (to the left) is some personal avatar art from my now ex-friend.

I can tell you the history of this avatar. It started out as a MLP avatar. Then MLP put out the Equestria girls series, so the avatar had to follow suit. This character in question is so powerful, I wasn’t able to do a roleplay session with Taus for story creativity because the character had no flaws. The story literally could not move forward. So I stopped trying within an hour.

With Taus. TAUS OF ALL CHARACTERS.

Now there’s not much to be said over a shirt that reads DIE, as this one obviously does. I’m sure I’m not the first person to think of a shirt that reads DIE. The thing about this particular shirt that reads DIE is my ex-friend was someone I used to hang with in person. We’d see each other at conventions. She handled the physical copies of Ola Gist. And I wonder… does anyone get credit from these types of scenarios ever?

I’m not knocking the ex-friend with this post, understand. This is just a situation I have been made aware of, and because of my past history with having my shit just taken without so much as a by your leave I feel it’s necessary to say this: Ola Gist. She was here first. She’s obscure, but she’s still mine.

*After all these years I can’t remember the name of the magazine exactly, but that sounds right.