I’ve been preoccupied lately with work while getting nothing done. Things are balancing out so that I’m able to back off even more and consider making comics a bit more of more in my time schedule. This is good.

3D developments continue: made an Akashik comic the other day simply because I could. It doesn’t look how I like it yet – probably will never – and I’m actually considering making up a process where it’s half drawn and half 3d. This way it would have more of my flavor but my hand might survive the making. Anyway, it’s no rush considering the finances and all that. One thing at a time.

On another comic note, I’m incredibly frustrated. I found a way to return 10 Confessions back to its original form. This return would help my hand, put 10 Confessions back on track, and make things how I want them. It was an art plugin called AKVIS that made it possible. I had a trial version, and that version ran out. So I’m sitting here stuck on 10 – so close, so very very close – until I can get the money to continue. It’s like being stuck outside the wall wanting in from the cold. Brrr!

And finally, I do have more Cyphacon and (now) Bayoucon footage for you. I keep trying to upload the next segment and it keeps timing out. We’ve been having some internet troubles lately so maybe that’s it. But I am working on it, I promise!

And I guess that’s it for now, eh? 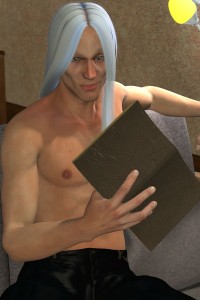 I’ve spent a lot of time lately working on the 3D models for Heavenly Bride and Akashik – because even though I want to do things handmade I just don’t think my hand will be able to take the punishment. I’ve also been working on the script and really pulling out the super power element of the story where it was a dull hum before.

I need to make a new 3D Genesis dial model.

Oh no! Surely you jest!

Oh no! You mean there are humans around?

Yes. To be precise I gotta develop the human who… ahem, for lack of a better way to put it… took Lhung’s virginity. :sweatdrop: I figure with naughty images, she’d be a great linear start.

So although I knew I should be working on other people’s stuff, I devoted some time researching the matter. Because this woman has tattoos on her back. And with 3d models, that means there’s a seam and it’s very very difficult to just plop a tattoo down on the texture and call it a day. It took me a full day just to do Taus’s tramp stamp. I can’t imagine Hitomi’s tattoos. Oy vey.

I found several possibilities, all of them more money than I make in a month (these days) or a week (normally). The one I’m seriously considering, though, is DecalMaker – which fortunately is still available at Daz3D although Renderosity, my store of choice, no longer carries it. DecalMaker apparently was made for folks like me who wanna stick tattoos in the most seamful and sinful areas. But. It’s like $40. -_- But this is my current goal for the Heavenly Bride/Akashik projects.

A lot of people in the world Akashik have tattoos. There’s a language to them. If they’re in a certain area, they can mean anything from “made in Japan” to “property of Microsuck who is also the property of IBM, makers of the U.S. President clones”. So I know that the program is a good investment, but you know I truly wish I could demo it first to make sure I wouldn’t be losing valuable grocery money. *whine*

But that’s what I’m up to. Sexy Hitomi images looming around the corner. If I could get the quality of my renders higher than I have them right now…