Today the Goodreads giveaway for a free copy of The Eyes of the Setting Sun- has ended, and 10 lucky winners have been selected. I just opened up my account to see where the books are going: Louisiana, New Jersey, and some select other nifty places. I already have an order for their copies in place, so once those arrive I’ll put them right back in the mail to go to their intended new owners.

This also means the preorder sale is over, as the book was officially released on the 4th. But good times! Here’s hoping our author sees great success, because that would make me very happy. But you know I’ve always tended to put my clients and authors first. Something about good business and other such matters.

I’ve been working on a new animation – for the Mohegan language project. If you didn’t know, I’ve been working (slowly) on creating material to bring one of our chief native languages back to my people. This is one reason why I’ve been driven to quit my business so hard, so I could have the time. (The webcomics of course were a bigger drive.) I’m at a point where I’m getting emails from clients asking me to work and I’m turning them down, even though sometimes I look at our bank account and wonder if I’m doing the right thing. The webcomics bring little to no money, and this language project is actually starting to get expensive. But it’s also worth it.

Someone recently told me that they were envious on how I get something done on various projects in one day. Meanwhile I’m jealous of them and how they have their activities down to only two things or so. The grass is always greener! I can’t help wanting to do a billion projects: so many ideas, so little time… this is why I pace myself the way I do. So this morning I have worked on the Mohegan project. I’ll take a few minutes, review some of my lessons, and then I’ll probably dig up the live action video material and spend an hour on it. Then I’ll turn to The Heavenly Bride… while also going through my email in spots to handle a commission and the accounting… and then before bed I’ll take an hour to work on Demonkeeper’s Daughter, which I hope you guys will enjoy when I am done.

And yet, probably because of how I pace myself, I still find time to play Super Mario Kart, exercise, watch TV and even read. It sounds like it’s a lot of work. It’s not. Also, because I love what I do, it tends to turn into a lot of fun so that at times I’ll choose one activity over another simply because I’m absorbed.

Hrm. It looks like I need to find some time for lunch. Maybe a salad. Hrm.

Perhaps there is a light at the end of the tunnel. Let us hope so. We received the following text: 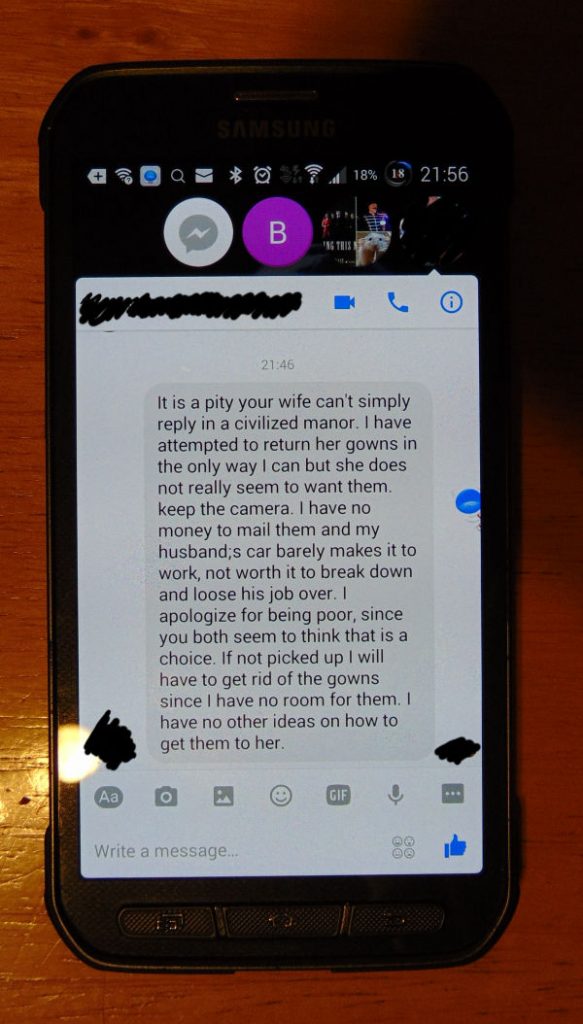 Yep, more evidence. I mean, who’m I to pass up a golden opportunity to cover my ass just like working for civil government taught me to? Seriously. Nope. I’m definitely rich in opportunity this week. You might say I’m choosing to cash in.

I also can’t reply in a civilized manor because I don’t have a manor, civilized nor savage, to reply to anyone in. It is a pity, true. Unfortunately we have apparently chosen to be too impoverished to have such fine and fancy things.

In order to reply in a civilized manner, as the text surely means, would have meant I would have to 1. put myself at risk and 2. make contact, which is something the poster here expressly forbade previously as you may recall.

Regarding keeping the camera, it was almost too late to stop the arranged delivery. Lucky for me the package hadn’t been picked up by the mail yet. Great because that was gonna cost me money.

In order to make it in this old world, to know success, there are some rules you simply must live by. I learned this very late in life, and I could have had a better time through the years if only it had sunk in sooner. These rules are: 1) Know the white line of wisdom. 2) Surround yourself only with successful or up and coming souls. 3. Don’t let people abuse you. When I realized these three tenements and started to adhere to them, my life did a complete 180 degree turn around.

If she truly has let the situation go, then the gowns are not worth the drama it would take to get them back. They’re just things. Since my nemesis is so very poor, by her own statement here, she is welcome to sell them on ebay. Collectively they’re worth more than her camera. If they all sell, and they most likely will, she could buy an even better camera. That would be a good, because I have to confess I looked up her camera to see why it was worth such a crazy fight.

When it first came out it sold at a max of $299, people are selling used ones on ebay for $50, it overcompensates when it comes to zoom, it cuts long videos into segments with noticeable skips aaaand… mmmm…. I’d use it for stock footage perhaps, but not for anything more than that. It simply isn’t worth the drama I have been given.

Well its too late to recall the cease and desist letter, but it won’t matter if she truly just lets things go and walks away. Which is all I wanted from the very start: to be left alone. Right?

I am seriously hoping so. As the husband collects evidence in this retarded situation against her, he keeps coming across things. Like… her using my legal name in public to warn people away from me directly after Hypericon. And Apparently I threatened her daughter all weekend somehow… perhaps telepathically being as the girl was *always* somewhere else and basically missing as I mentioned before. Oh, and did you know I insisted she go to the convention even though she had the flu (She finally admitted she was sick!) to boost my own ego?  That last one made me and Tim both laugh – because we have the conversation log where she first states very clearly that she’s fine and asks us to come get her.

I don’t think I care, though, so long as I continue to be left alone. People talk smack. The trashier they are, the trashier it gets. I hope other people see the truth about her soon. You might say I was lighting a candle upon my alter, calling upon some universal role to bring about a truth laid bare. Perhaps I’ve even placed a mirror on that altar, to shield our house from any harm that might have been sent our way…

Let us hope that this has ended. Today I am carrying on with my positive life. So many ideas, so little time.