The other morning I woke up and, still wiping my eyes, toddled over to the computer to check messages. This was when Facebook took it upon itself to remind me that I had an anniversary coming up – that day. Who knew.

The husband and I agreed for our anniversary we would upgrade my phone so we could play Pokemon Go together. I’m not a big fan of Pokemon, but I am a small fan of finding ways to do moderate exercise without getting bored. I’ve tried all sorts of programs. So that’s what we’ve been doing the past few days: playing Pokemon Go in the evening when the heat releases its hold on the world a bit. Late evening. Okay. Night, right before bedtime.

I have no idea if this latest exercise weight loss scheme is working yet. I’m not holding my breath or anything. 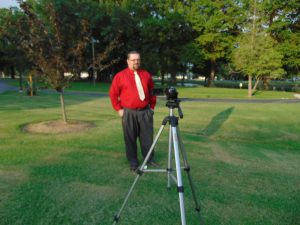 All in all it’s been a pretty active few days, though. Another bit of action happened yesterday. We took ourselves to the park for a bit of filming. Good stuff! After looking at our footage – more test footage than anything – I’ve decided to go in a different direction with this planned short piece though. I don’t normally rewrite things, but this piece is meant to be 100% improv so I have this peanut butter freedom a script doesn’t normally afford in my world.

I do love making film as a hobby, and although I have no intention of going full tilt with the things I do let’s face it: I’m headed that way fast. The Mohegan Project is growing, and I have all of these ideas (and so little time). The husband has also been bitten by the creation bug. I’m practically tearing his jaw off while pulling at the reins. Whoah, Nellie!

For now I’m trying to concentrate solely on this one little idea while planning the other 2 for the future. Y’all know that when I plan for the future, this sometimes means the far future. I won’t bore you with another update on my usual projects: it seems to be all I talk about on this blog, I swear.

The only drawback to increasing the level of my physical activity is that my schedule gets thrown completely off, and it’s hard for me to keep work going at a steady pace. Today I woke up at a classic 6 AM despite my best efforts, though, which generally means the switch in my head that puts things back on track has been flipped. I’m good for that.

But yet here I sit, wondering what I’m supposed to be doing right now. The truth is I don’t like to start work until around 1:30, which is when the husband goes back to work after coming home for lunch. Hrm.

Today the Goodreads giveaway for a free copy of The Eyes of the Setting Sun- has ended, and 10 lucky winners have been selected. I just opened up my account to see where the books are going: Louisiana, New Jersey, and some select other nifty places. I already have an order for their copies in place, so once those arrive I’ll put them right back in the mail to go to their intended new owners.

This also means the preorder sale is over, as the book was officially released on the 4th. But good times! Here’s hoping our author sees great success, because that would make me very happy. But you know I’ve always tended to put my clients and authors first. Something about good business and other such matters.

I’ve been working on a new animation – for the Mohegan language project. If you didn’t know, I’ve been working (slowly) on creating material to bring one of our chief native languages back to my people. This is one reason why I’ve been driven to quit my business so hard, so I could have the time. (The webcomics of course were a bigger drive.) I’m at a point where I’m getting emails from clients asking me to work and I’m turning them down, even though sometimes I look at our bank account and wonder if I’m doing the right thing. The webcomics bring little to no money, and this language project is actually starting to get expensive. But it’s also worth it.

Someone recently told me that they were envious on how I get something done on various projects in one day. Meanwhile I’m jealous of them and how they have their activities down to only two things or so. The grass is always greener! I can’t help wanting to do a billion projects: so many ideas, so little time… this is why I pace myself the way I do. So this morning I have worked on the Mohegan project. I’ll take a few minutes, review some of my lessons, and then I’ll probably dig up the live action video material and spend an hour on it. Then I’ll turn to The Heavenly Bride… while also going through my email in spots to handle a commission and the accounting… and then before bed I’ll take an hour to work on Demonkeeper’s Daughter, which I hope you guys will enjoy when I am done.

And yet, probably because of how I pace myself, I still find time to play Super Mario Kart, exercise, watch TV and even read. It sounds like it’s a lot of work. It’s not. Also, because I love what I do, it tends to turn into a lot of fun so that at times I’ll choose one activity over another simply because I’m absorbed.

Hrm. It looks like I need to find some time for lunch. Maybe a salad. Hrm.