Our finances are disastrous right now. I haven’t been making much money lately, and it’s my money that’s been holding things together. With doubled taxes on just about everything, my husband and I have been forced to separate. He’ll be couch surfing until his pending retirement from the army finally goes through. I packed my office and came home. This is now.

About four years ago, my husband was stationed at Fort Polk in Louisiana and I moved down there to join him. This meant leaving our house behind and choosing to really do without on a lot of fronts, but it seemed important to keep our family together at the time. I convinced my friend who was living on her own in an internetless neighborhood to move into my house for me. She would live rent free and pay her utilities in exchange for not letting the house fall down around her ears.

I warned her I would be coming home at any time without warning. I also warned her the area was due a natural disaster – so I guess my warnings were passed off as crazy prophet nonsense. Because when the super tornado hit about a year later, she was surprised. And when I finally made it home yesterday, she was terrified and cried for hours.

But she knew we were coming. I just wouldn’t tell her the exact day – and the reason for it was I needed to catch her in the act. But she knew. She knew for four years, and then two, and then a matter of months. And during all this time, I had people who were driving through randomly check on the house for me.

I was told that cat urine had been allowed to stain my downstairs curtains. That the smell in the house hit you like a load of bricks. That the place was messy trashed. That the garage was so full of my friend’s stuff you couldn’t park your car in it. That the gutters were a mess. The place smelled like mold. The place was, to use a single word, nasty.

And for the past four years I have been told by her over and over again how she couldn’t afford to live. I offered to turn off the cable. I offered to turn off the house alarm. No, she’d make it she told me.. to me at least. And I guess it hasn’t been that bad if she could afford to drive from Illinois to Florida for a convention to meet a boyfriend she met online in California right?

So when it came to the fact that my husband and I could no longer afford to live, I put it out on The Heavenly Bride that the comic would have to go on hiatus for a while until I got home and my life straight again. (Thanks, U.S. Government!) So I knew she knew, because 24 hours after I put out the notice she called me. The house was being cleaned for my arrival, she told me smugly. And I shouldn’t worry about the bills because she had money saved up for a while, we’d be fine. Okay good. I still refused to tell her I was leaving Thursday night. I had to catch things for myself.

Why? Because somehow, people always think I’m the bad guy. After what my daughter did, I’m rather tired of being the villain. I mean, sure if I were TRYING to be the villain I’d enjoy the label… But there’s this guy in Miami who honestly believes I spent a *lot* of money out of his bank account that my friend had access to (but I didn’t) because she was driving around buying snacks and goofing off every day… I’m not quite sure what the story is. I just remember his “concerned” phone call to ask me to stop it.

That being said this is what I came home to yesterday: 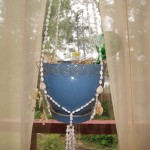 A front door still sporting a green condemnation X the city had painted on it years ago. A house so desperately cleaned the smell of the chemicals kept me from entering the basement. 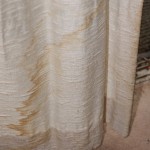 Dead house plants, like a smatter of floral zombies with their dead parts on the floor from dining room to reading room. Basement curtains were clearly stained. Most of the house had clearly been vacuumed recently, but “The Blue Room” smelled of cat urine. Hardly any sign of any of my belongings – I guess because she had them shipped to us four years ago despite my clear instructions to have the military movers 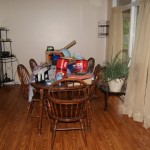 only pick up my bedroom, my office, and the boxes I already had packed waiting by the door. (Yeah, it was free. And yeah, they broke most of our stuff.) Her stuff is everywhere in such a clutter I literally have no place to draw or set down a coffee cup. Black mold in the basement. A rotting deck probably due to a clogged gutter. Glass, nails and shingles still throughout the yard from the tornado years ago. Bush weeds taking over various parts of the yard. Old dried up cat diarrhea in the hallway 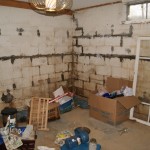 . And a friend bawling her eyes out in my arms. 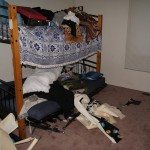 A lot of what we found we can’t blame our friend for. For example, the garage mess turned out to be mine. The clutter in the Blue Room was stuff my husband had brought home two years ago or so. Cleaning gutters? Yeaaah… I couldn’t do it either. The mold? She’d never had a basement before and had no clue. But… the cat urine… clutter… I mean. She wasn’t renting this place. She was staying for free and being a guardian of a home that’s also considered by me and my friends to be “The Temple to Nothing”. She… defiled an entire temple.

My poor plants. All brown, dried up and brittle because she “over watered” them. Magically, recently, when she admits they were beautiful and green for three years running. She started college and bam. They died. Just like that.

Except my aloe plants, which look like big green monsters in pots that are too small for them… and one special plant. The hardiest plant in the world.

It was my job to do walk throughs on foreclosed houses, and this little sucker I found in a kitchen window of a house that had been abandoned for months. It was barely clinging to life at the time. I took it home and promised it that it was saved.

From there it flowered like it was springtime as if in thanks and got bushy…it used to decorate the reading room. And while everything else withered up and blew away around it, it sat there waiting. And clung to life.

Yesterday after I’d settled down from driving for two day straight I realized there was still some green and forced my friend to water it.

Today while beginning a bit of clean up I figured out why this little guy had survived. He had sprouted roots all over his little body and he was getting water out of the air. The main root system in the soil is dead.

I’m forking impressed. My little plant has been named Hardy… I’ve taken the branches and put them all in water. When I’m done I’ll probably have a Hardy, Hardy 2, Hardy 3, etc…

Because he’s the hardiest plant in the world.

As for my friend: well. I can’t be too angry. I asked her to uproot and move in. Sure I gave her a free ride for four years, and sure there are some things I no longer am going to tolerate. Now that I’m home her entire lifestyle has to change – that’s kind of a rule when living with me. No soda in the house, I’m not going to tolerate her clutter all over my dining room table for her office when she has a perfectly huge office to use… If I catch myself being the bad guy again, our friendship will be over… you know. That sort of thing.

And you gotta give my friend credit. She helped my daughter get her driving license (I knew I’d be too impatient and paranoid). She was here when the tornado hit and handled a lot I couldn’t be here for. Things like that as well.

We’ll replant, we’ll fix the rotting deck, we’ll do what we can do get this place back together.

My temple’s spirit is symbolized by my little plant, I think. My husband and I: we’ve been getting hit by betrayal, government extortion, you name it to the point we feel as though our own main root system has been damaged. But like this plant, we keep putting out our little roots. And we’re clinging, dammit, even if we have to suck it out of the air.

Today we fix the new door. Tomorrow who knows.